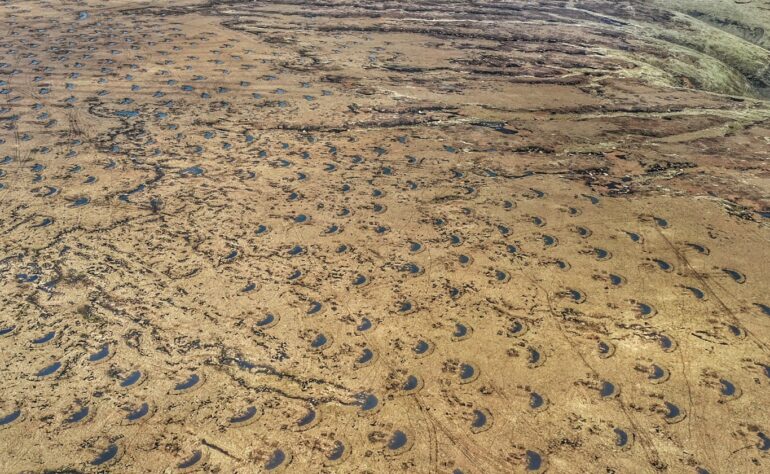 A vast area of moorland has been transformed into a ‘giant sponge’ to tackle the effects of climate change.

The project on Holcombe Moor above Ramsbottom and Bury is also being credited with helping to protect nearby lowland villages from flooding during intense rainfall.

The scallop-shaped banks hold water behind them and have been dug across a plateau area of the picturesque site on the West Pennine Moors.

The project has also seen 403 stone and 308 peat dams built to further slow the flow of rainwater running off the plateau, with half a million sphagnum moss plugs planted in the resulting soaked ground to create boggier habitats and hold moisture in the soil.

The slow degradation of the peatland over years – a result of pollution, moorland fires, erosion and overgrazing – has dried out the surface, meaning peat can no longer store carbon as it should, the National Trust said. 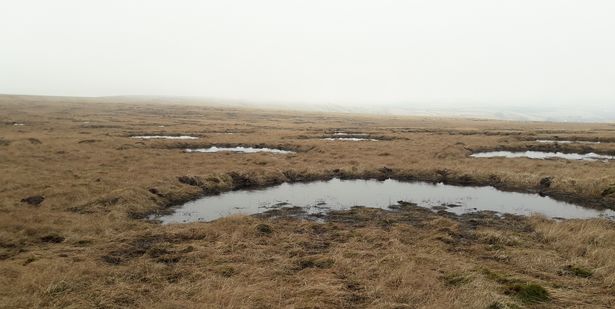 Damaged peatlands are a major source of greenhouse gas emissions, which contribute to global warming.

The sphagnum plants should colonise the pools and create a carpet of moss on the moor, over time restoring the important peat soils beneath and returning the land to its full potential as a tool for tackling climate change as peat retains carbon again, the Trust added.

Rainwater would previously wash the peat away and change the eco-system to make it less suitable for moorland birds.

The National Trust together with the Moors for the Future Partnership, Natural England and the Holcombe Moor Commoners’ Association spent six months creating the bunds to improve the condition of the peat, enabling it to store carbon while boosting bird numbers and reducing flooding downstream. 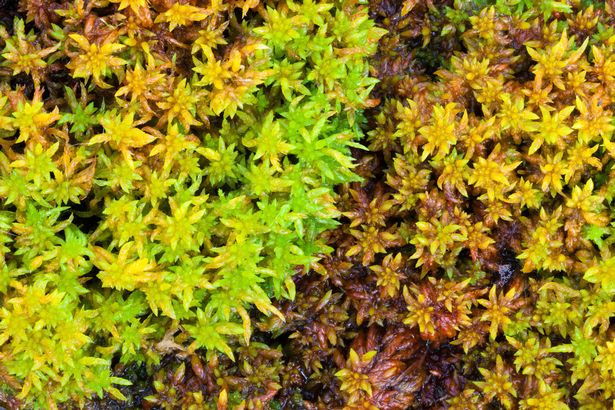 The National Trust said it believes the interventions may already have had an effect, as flood-prone communities at the bottom of the moor avoided damage during Storm Christoph earlier this year.

Maddi Naish, Rural Surveyor at the National Trust, said: “If you imagine a giant sponge which is covered in thousands of small holes and can hold large quantities of water – that’s what we’re aiming for here.

“The peat bunds stop rainwater rushing across and off the plateau and instead trap it on the moor, allowing special plants to thrive which help the peat to absorb carbon from the air.

“These interventions provide a range of other benefits too, including reducing flooding downstream, improving water quality and attracting rare wildlife, such as golden plover and dunlin, which have declined in recent years.

“Peatlands only cover a tiny percentage of the world’s land, but are superheroes when it comes to storing carbon.

The project has been funded by Defra and the Environment Agency.

Environment Minister Rebecca Pow said: “Peatland restoration at Holcombe Moor is a shining example of innovative action being taken across the country to lock up carbon, store water and provide a home for rare wildlife.”

Holcombe Moor is part of the Stubbins Estate, which was gifted to the National Trust in 1943 by a local mill owner in memory of his son who died in the war.