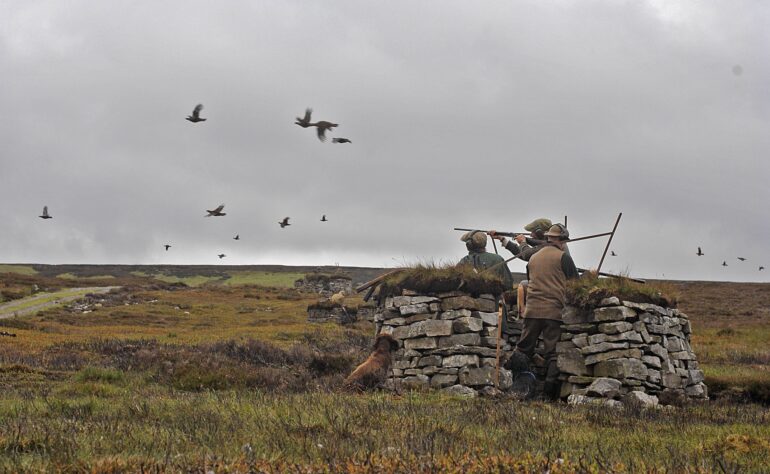 Yorkshire Water is being told to choose between having wildlife or grouse shooting on its moorlands across the county, following a key meeting with Wild Moors and the League Against Cruel Sports. The appeal comes as the utility company launches its five year plan this week, which sets out a roadmap for enhancing the environment, conserving habitats and protecting native wild animals.

The company presently leases out eleven sections of moorland for grouse shooting, where tenants are permitted to trap and kill native wildlife – including stoats, weasels, foxes, corvids and mountain hare – to preserve game birds for shooting parties. Heather is also burnt to provide for large numbers of red grouse, a practice which causes damage to sensitive peatland habitat and makes it unable to support many breeding bird populations. Burning also contributes to flooding in valleys below grouse moors and increases carbon emissions.

Grouse shooting is incompatible with Yorkshire Water’s environmental policies and customer expectations, Wild Moors and the League add. Over 10,000 people have contacted CEO Richard Flint over the summer to urge the company to stop leasing land for the blood sport.

“Yorkshire Water allows large numbers of native wild animals, including foxes, stoats, corvids and mountain hares, to be killed on its moorland to preserve red grouse for shooting parties. When coupled with habitat being damaged by burning – a practice performed to engineer high populations of game birds – this paints a bleak picture for wildlife on moorland leased by the company for grouse shooting.

“If Yorkshire Water wants to be recognised as taking its environmental responsibilities seriously, then ending its grouse shooting leases is the only course of action that will suffice. By removing the negative impact allowing the practice has on wildlife, habitat and the regional economy, Yorkshire Water will truly become the environmental champion it espouses to be.”

Nick Weston, Head of Campaigns at the League Against Cruel Sports, says:

“Yorkshire Water must choose between enhancing wildlife and the environment, as set out in its business plan, or allowing it to be damaged by grouse shooting interests. The reality is that conservation and grouse shooting are inherently conflicting, with native wild animals killed and sensitive habitat burnt to provide large numbers of game birds for the guns.

“We strongly urge Yorkshire Water to do the right thing by ending its grouse shooting leases. Customers and investors would expect nothing less from a company which purports to be a leader in wildlife and environmental protection.”