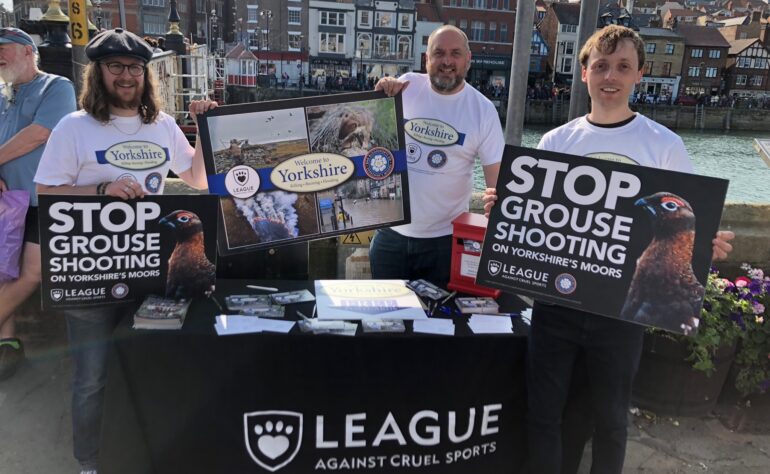 Campaigners have held a weekend of action in four Yorkshire Coast towns as part of a campaign urging Yorkshire Water to stop leasing moorland for grouse shooting.

Yorkshire Water – one of the region’s largest landowners – is being urged to stop leasing moorland for grouse shooting, with over 1,000 people signing petition postcards to the utility company in Whitby, Scarborough, Filey, and Bridlington during a weekend of action over the Bank Holiday.

It forms part of a joint-campaign by Wild Moors and the League Against Cruel Sports, whose supporters are taking to towns and cities across the county throughout the summer, in a bid to persuade Yorkshire Water CEO Richard Flint to pull grouse shooting from the company’s land.

Grouse shooting on Yorkshire Water moors is causing considerable damage to wildlife, habitat and the Northern regional economy. Native wild animals – including stoats, weasels, foxes and corvids – are purged from the uplands by trap and gun to engineer large numbers of game birds for shooting parties. Large sections of heather are burnt for the same purpose – a practice which degrades peatland and contributes to flooding in the valleys below.

“We thank the people of Yorkshire’s coastal towns for their support in urging Yorkshire Water to stop leasing moorland for grouse shooting. Huge sections of uplands owned by the company across the region are being purged of native wildlife and having peatland habitat degraded to increase game bird numbers for shooting.

“If Yorkshire Water wants to be recognised as taking its environmental responsibilities seriously, then ending its grouse shooting leases is the only course of action which will suffice. By removing the negative impact permitting grouse shooting has on wildlife, habitat and the regional economy, Yorkshire Water will truly become the environmental champion it espouses to be.”

Nick Weston, Head of Campaigns at the League Against Cruel Sports, said:

“We are proud to have the support of residents of Whitby, Scarborough, Filey and Bridlington to oppose Yorkshire Water’s decision to permit grouse shooting on its land. Across the UK up to 700,000 grouse are shot every year in this cruel and unnecessary ‘sport’, and the practices used to ensure high grouse numbers cause devastation to the local wildlife, landscape and people.

“The irony that a company like Yorkshire Water, whose role it is to provide for its customers and the community, is facilitating such destruction, is not lost on me, nor the residents of Yorkshire’s coastal towns There is no justification for this to continue, and it’s time for it to stop.”