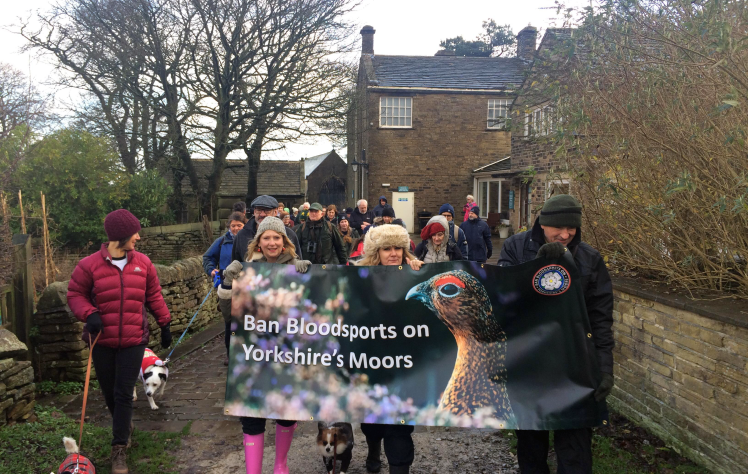 Carrying home-made banners and festive-themed picnics, over 60 campaigners from Wild Moors held a protest ramble on Haworth Moor this lunchtime – on the weekend the grouse shooting season closes (photos here). Their goal? To persuade landowner Yorkshire Water to stop leasing the moorland, and others across the county, for grouse shooting, in light of the negative impact on wildlife, habitat and damage to popular tourist destinations.

‘Jaw-like’ traps containing the decomposing remains of wild-animals have been found controversially set on the utility company’s moorland around Haworth, aimed at preserving game birds from natural predators for shooting parties. The world-famous moorland, which inspired Emily Bronte’s Wuthering Heights, has also been damaged by heather burning and construction of grouse shooting butts.

A tawny owl was found shot dead on Yorkshire Water’s grouse shooting moorland at Wessenden Head in nearby Holmfirth in October, it has been revealed this weekend. The bird was discovered containing shotgun wounds and stuffed into a wall, prompting the RSPB and West Yorkshire Police to launch a wildlife crime investigation.

BBYM has investigated six moors leased out by Yorkshire Water for grouse shooting since August, uncovering widespread wildlife persecution and environmental degradation on each. Every local authority in the county, including nearby Bradford Council, has ended the bloodsport on their upland estates, having once allowed it, and Yorkshire Water is being urged to follow their example.

“Living as I do in Wensleydale, surrounding on three sides by grouse moors, I see first hand the damaging and destructive practices that go with “moor management” even within a national park. This includes the burning and draining of valuable blanket bog and the wanton destruction of legally protected species, especially our fast-vanishing raptors.

“Every Wuthering Heights fan will remember the beautiful moment when Cathy presents a hen harrier feather she has collected on the moor to Heathcliff and teaches him to pronounce the bird’s name. Yet on the moors above Haworth which inspired Emily Brontë to write this tragic literary tale there are no more hen harriers, or many other sensitive breeding birds, because their moorland home has been severely damaged by grouse shooting.

“There is only one way manage moorland for grouse shooting and that is through purging the uplands of native wildlife and burning away precious habitat, at the expense of our region’s biodiversity, natural flood barrier and proud reputation.”

Over 16,000 people have signed a petition to Yorkshire Water’s CEO Richard Flint, demanding the utility company brings its grouse shooting leases to an end.