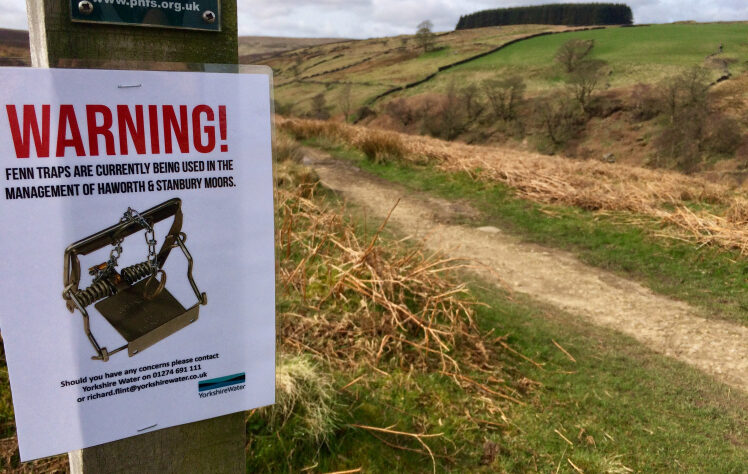 Signs warning walkers about the use of animal traps on Haworth and Stanbury moors have been put up by anti-bloodsports campaigners.

The wildlife conservation group says visitors “have a right to know” that over 100 jaw-like traps are set across Haworth and Stanbury moors targeting native stoats and weasels. Gamekeepers eradicate natural predators to boost red grouse numbers for shooting.

Wild Moors is calling on Yorkshire Water to end its controversial shooting agreements on the moors, which allow the Walshaw Moor Estate and Haworth Moor Syndicate Shoot to operate grouse shooting and trap wildlife on utility land.

Yorkshire Water announced a review of the future of grouse shooting on Baitings, Turley Holes and Higher House Moors in neighbouring Calderdale last week. The company is facing pressure to broaden its review to encompass its other grouse shooting leases, including those on Haworth and Stanbury moors.

“Visitors to Haworth and Stanbury moors have a right to know that deadly wildlife traps are set across the land to facilitate Yorkshire Water’s grouse shooting leases. It is our civic duty to inform users of the moors that jaw-like traps are being used in the area because Yorkshire Water has not.

“It is a grim reality that native wildlife continues to be eradicated and sensitive habitat damaged by burning on Yorkshire Water’s leased moors to boost grouse populations for shooting.

“If Yorkshire Water wants to be recognised as taking its environmental responsibilities seriously, then ending its grouse shooting leases is the only course of action which will suffice. Only by completely removing the negative impact allowing the practice has on wildlife, habitat and visitors to the area will Yorkshire Water truly become the environmental champion it espouses to be.”

The issue of grouse shooting has become increasingly contentious with a number of high profile landowners across the region already distancing themselves from the practice.