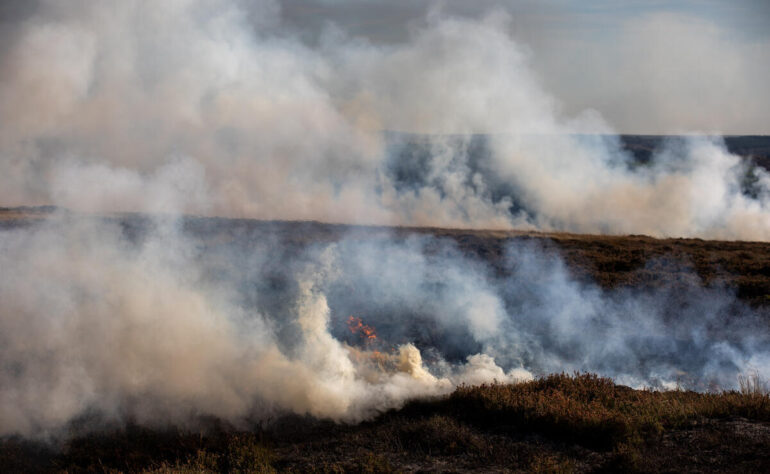 Campaigners say there has been a fivefold increase in damaging and ‘absurd’ burnings in national parks.

More than 100 moorland fires have been reported across England’s national parks in the past four days, a fivefold increase on last year.

Just weeks before countries gather in Glasgow for Cop26, the UN climate summit, thousands of acres of moorland across the north of England have been torched as part of annual burning carried out by the grouse shooting industry, a practice wildlife campaigners describe as “absurd” and “illogical on so many grounds”.

Despite legislation brought in earlier this year that banned burning on some of the country’s most valuable peatland, figures compiled by the wildlife campaign group Wild Moors, and shared with Unearthed, the investigative arm of Greenpeace, and the Guardian show the number of fires has risen dramatically.

This is part of a growing trend for burning peat moorland, mostly in the North York Moors, the Peak District and the Yorkshire Dales, which causes ecological damage, releases large amounts of carbon dioxide into the atmosphere and can lead to flooding.

During burning season, when burning is permitted between 1 October and 15 April, gamekeepers use blowtorches to strip back heather, allowing new shoots to grow, which provide food for grouse.

While most of the fires are legal, Natural England told the Guardian it was investigating two locations where illegal burning may have been carried out.

Luke Steele, the director of Wild Moors, said: “Whether it’s legal or illegal, it’s outright wrong, because these are our biggest natural carbon stores and we’re literally setting them on fire for grouse shooting.”

He said communities were often left frustrated when they were engulfed in smoke coming off the moors at this time of year, creating a public nuisance and a public health risk, and that research showed burning worsened flooding.

Steele said: “We know from scientific research that when you re-wet the peat bogs, as they should be, not only does it increase the carbon storage potential but it also holds back rainwater and reduces flooding … by over half.

“The science is there to demonstrate this but the government is still allowing these important carbon stores and natural flood barriers to literally be set on fire for grouse shooting in the 21st century. It’s illogical on so many grounds.”

Peatland is the UK’s largest natural CO2 store, locking in an estimated 3.2bn tonnes of CO2, as well as providing nesting and feeding grounds for many wading birds and important habitats for rare insects and plants.

The Heather and Grass etc Burning (England) Regulations 2021, which came into force in May this year, ban burning on land in conservation and special protection areas where there is peat more than 40cm in depth.

This leaves about 40% of the UK’s peatland vulnerable to burning, falling short of the recommendations of the government’s climate crisis committee, which called for a total ban on burning on peatland as part of a wider package of changes to the way land is managed, in order to reach net zero emissions by 2050.

Critics say the reported rise in burnings, from 21 in the first week of October 2020 to 109 in the same period this year, shows current laws are “riddled with loopholes” and do not go far enough.

Kate Blagojevic, Greenpeace UK’s head of climate, said: “It’s obvious that the government’s regulations are worse than toothless and completely failed to stop this absurd practice that damages both the climate and wildlife.

“A comprehensive ban should be introduced immediately along with concrete measures to fully or highly protect at least 30% of our land and seas by 2030. Anything less would be a major embarrassment for the UK government. There are better ways to welcome world leaders to a crucial climate summit than the sight of smoke and flames engulfing our largest carbon store.”

A Defra spokesperson said: “We have always been clear of the need to phase out rotational burning of protected blanket bog – which is why we have brought forward legislation to protect these vital habitats from harm whilst ensuring landowners and managers have the tools available to protect and restore them to their natural state.

“This represents a crucial step in meeting the government’s nature and climate change targets, including the legally binding commitment to reach net zero carbon emissions.”

(Re-published from The Guardian)