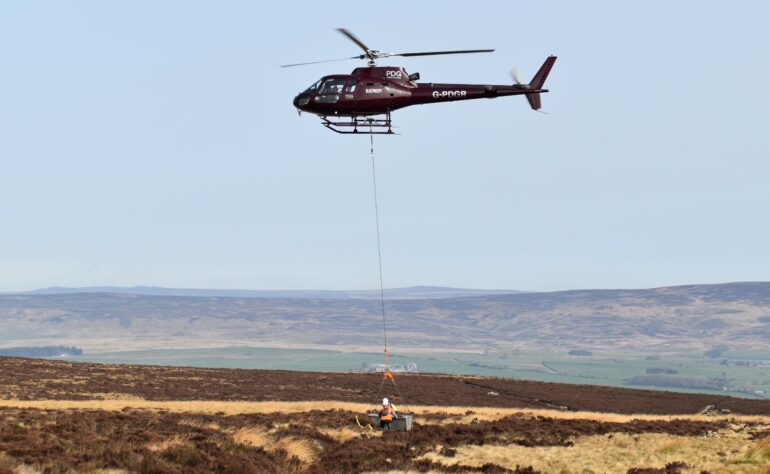 A conservation drive has kickstarted on the world-famous Ilkley Moor to create wildlife habitats and strengthen the region’s ability to fight climate change.

Bradford Council has teamed up with the Friends of Ilkley Moor, Moors for the Future and the Environment Agency to restore a large section of blanket bog to its natural, waterlogged state, so it becomes capable of storing vast quantities of carbon.

Small dams will be installed and drainage ditches blocked up to re-wet the peatland, building on the recent extensive planting of sphagnum moss to encourage peat formation.

“The Council’s Land Drainage team and Countryside Service are delivering a Natural Flood Management project that will help to reduce flooding and create favourable conditions for wildlife and carbon storage. These are all important elements of moorland management delivering wider benefits for the area.”

The government’s nature protection agency, Natural England, has placed the vast peatlands which characterise the uplands in the top trio of habitats most important for carbon storage.

This is because peatlands are a crucial lynchpin against climate change, storing as much carbon as all the forests in the UK, Germany and France combined.

Nature’s potential to decarbonise through restoring habitats such as peatlands is rich, withsome estimates suggesting regenerated habitats could offset 10 percent of UK emissions.

“Ilkley Moor is one of the largest natural carbon stores in the region, with its internationally-important peatlands being capable of locking vast amounts of climate-altering gasses in the ground, as well as slowing the flow of water to prevent flooding and providing a home for vulnerable breeding birds.

“By setting out an ambitious plan to migrate the moor from an ecologically-degraded former grouse moor to a healthy and functioning upland environment, Bradford Council is playing a leading role in achieving net zero and restoring biodiversity across the region.”

Grouse shooting ended on Ilkley Moor in 2018 following a successful campaign by Wild Moors to secure restoration of the iconic moorland landscape.