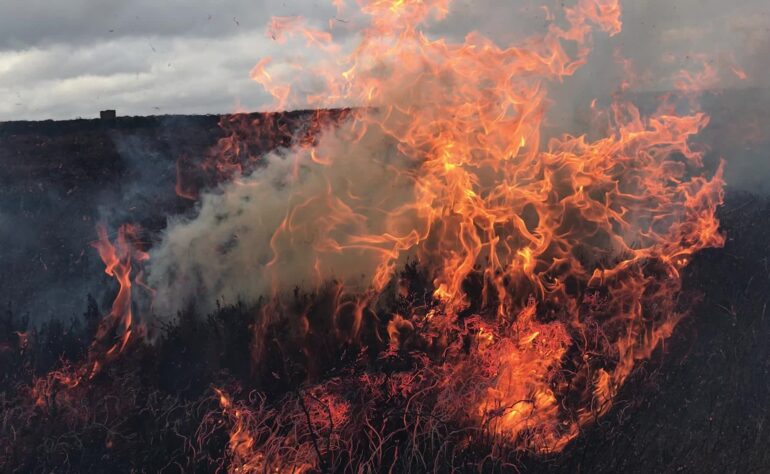 A partial ban on heather burning aimed at protecting some of the nation’s most sensitive peatland sites from being damaged for grouse shooting comes into force today.

The new legislation prohibits grouse moors from setting fire to many areas of fragile blanket bog, the deepest of peatland sites, to encourage new growth of heather to feed game birds reared for shooting.

Britain’s peatlands are a crucial lynchpin against climate change, storing as much carbon as all the forests in the UK, Germany and France combined. The government said, when unveiling the law, that it has reached consensus that grouse moor burning damages the important peatland ecosystems and prevents them from being restored.

Any grouse moor operator found to have performed illegal burning from today could face a range of penalties including a criminal caution, injunction, prosecution or removal of lucrative land management subsidies.

“England’s grouse moors are woefully under-regulated so we welcome the new legislation coming into effect today, which means that burning on deep peat will no longer be routinely allowed in many areas.

“Grouse moors are fanning the flames of climate change by setting fire to carbon-rich peatlands. Whilst the partial ban on burning is a step in the right direction, the government must now go the whole way by completely ending the destructive practice.”

Grouse moor burning increased by almost a third during the last season despite the incoming ban. 723 incidents of burning were recorded in Yorkshire alone by Wild Moors between October 2020 and April 2021, compared with 550 incidents during the previous season.

The new legislation would prohibit the 81 of these burns performed on blanket bog, showing an urgent need for the legislation to be extended to protect all peatland sites.

To address the environmental impact of burning and its contribution to carbon emissions the Climate Change Committee is recommending that the Government introduces a complete ban.

“The Government risks falling behind science and public opinion if it does not completely ban burning on all peatlands. We’re calling for urgent action to ensure the burning season which closed in April is the last.”

Research showing the number of burning incidents on Yorkshire’s grouse moors was collected by Wild Moors throughout the past two burning seasons (October 2019 – April 2020 and October 2020 – April 2021) and is available as a data table on request.

Broadcast quality footage and print quality photographs of burning this season are available to download here, with full permission granted for re-publication.