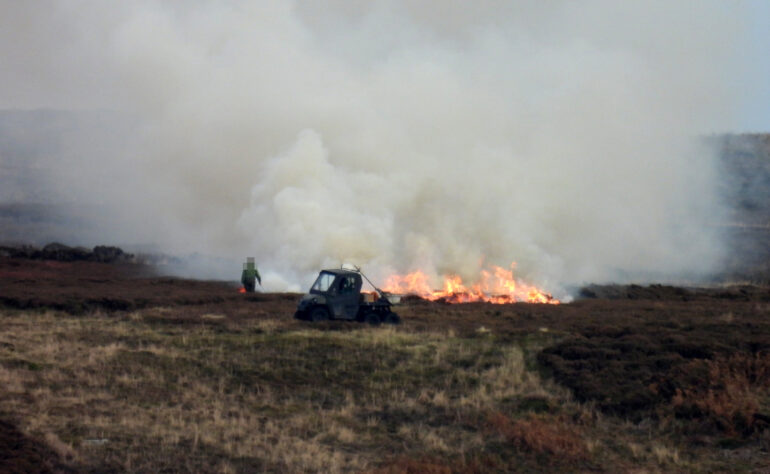 Grouse moors have been criticised for setting fires on fragile peatland habitat whilst the UK hosts the globally-important COP26 climate summit.

Wild Moors documented some of the dozens of fires set on moorland estates across northern England this week, which were performed to provide younger, more nutritious heather to be eaten by grouse reared for shooting.

The burning of carbon-rich peat moors by grouse moors is facing mounting controversy surrounding the contribution the practice makes to climate change.

Bradford Council is also investigating complaints that the fires resulted in severe smoke pollution in the Aire Valley and Wharfedale.

“Whether you are for or against grouse shooting, it cannot be denied that grouse moors setting fire to carbon-rich peatlands whilst the UK is hosting a major climate conference isn’t a good image for our country.

“If we are to tackle the climate crisis, we must face the facts: burning moors harms fragile peatland ecosystems, releases climate-altering gasses into the atmosphere, worsens flooding in communities downstream and exacerbates wildfire risk by converting wetlands into highly-flammable tinderboxes.

“It’s past time to put an end to the burning of peatlands for grouse shooting.”

However, Wild Moors is warning that many of Britain’s grouse moors are exempt from the new rules because they are located on degraded shallow peat, not blanket bog, despite urgently needing to be restored to a healthier, deeper state.

“Given the world is fast moving in a direction where restoring land for nature, carbon storage and people is at the forefront of solving climate change and biodiversity loss, fragile peat moors are at risk of being left behind if burning is allowed to continue on them.

“With grouse moor burning damaging one of the nation’s largest natural carbon stores, it’s never been so important for the government to introduce an outright ban on this archaic, intensive and environmentally-destructive practice.”