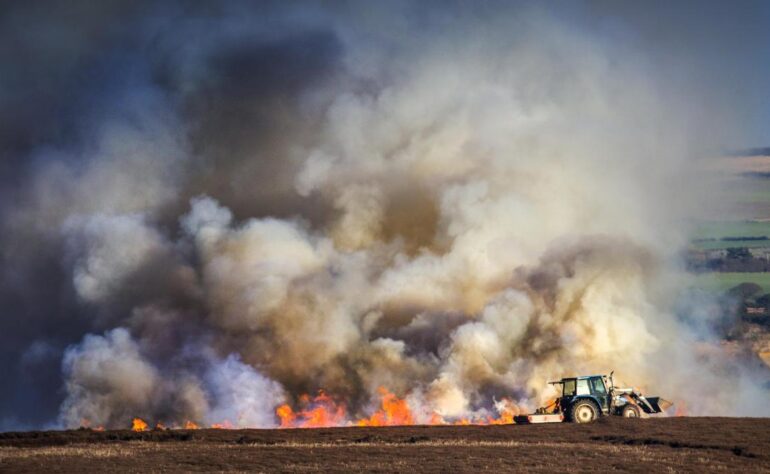 New figures showing the appalling scale of grouse moors setting fire to some of England’s most protected nature sites have been released today by the conservation campaigning organisation Wild Moors.

Between October 2021 and April 2022, there were 1,203 reported incidents of grouse moors burning on carbon-rich peatlands to cultivate younger, more nutritious heather for game birds being reared for shooting to eat.

These include 191 reports of suspected illegal burning performed on deep peat in contravention of a government ban introduced last May. When announcing the ban the government recognised “burning is damaging to peatland formation” and “makes it difficult or impossible to restore these habitats to their natural state”.

Wild Moors notes that there has been a 118% increase in the number of incidents of grouse moors burning on peatlands since it began investigating the controversial practice in October 2019.

Backed up by these figures, Wild Moors is today joining Greenpeace UK and the RSPB to urge the government to carry out a full investigation into suspected breaches of the law by grouse moors and introduce a blanket ban on burning peatlands.

“Grouse moors continue to fan the flames of climate change by setting the nation’s carbon-rich peatlands ablaze, despite the government’s climate advisers urging that every last peatland needs to be restored to protect these important ecosystems from collapse.

“By allowing grouse moor burning to continue in any capacity, the government is not only permitting peatlands to be damaged, but also giving space for the existing rules, as shortcoming as they are, to be broken. Wild Moors is urging the government to extinguish grouse moor fires once and for all by introducing a complete ban on burning peatlands.”

The nation’s peatlands store more carbon than all the forests in the UK, France and Germany combined. But grouse moor burning has become the biggest contemporary threat to these important conservation sites. Subsequently, only 4% of England’s upland peat is in favourable condition which is resulting in these important habitats converting from carbon stores into carbon emitters.

The Climate Change Committee, which advises the government on environmental matters, has recommended that grouse moor burning is completely banned to protect peatlands from further damage. They have also warned that it will be impossible for the UK to reach carbon net-zero unless all of these important habitats are restored to their healthy, functioning and natural state.

Fourteen local authorities and their leaders across northern England, including Bradford, Calderdale, Lancaster, Leeds and Sheffield, have also joined Wild Moors to call for a blanket ban on burning peatlands.

“Most people want to see the environment given the protection it needs and deserves, so it’s time to bring an end to harmful practices like burning on peatlands for grouse shooting and instead restore these treasured landscapes for nature, the climate and people.”


See here to find out more about grouse moor burning